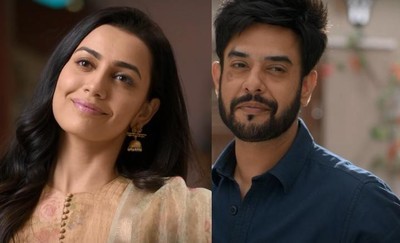 A new life April 8, 2022: The episode begins with Nimmo’s anger. She asks Soni to ask Kabir to go to the store. Soni says Kabir did not come, Dada ji came. Dad and Grandma arrive. Soni says Kabir is not responding, mom shouldn’t have scolded him much. Dadi says yes, you should have spared her on her birthday. Dada ji says let him, don’t let him come. Nimmo says what about the cake made for him. Amrita laughs. Nimmo says I want him to come and cut the cake. Amrita says then call him. Nimmo says you spoiled him, you name him. Amrita says he will be happy if you call. Nimmo calls.

She says he had logged off. Amrita says I will talk to her. Kabir retrieves Sharma’s scooter. Sharma’s wife asks if you want some tea. Kabir jokes about Sharma. He asks 5000rs. Sharma says officer said just 3000rs take it and leave. Kabir says fine, give the keys, we will take it back. Sharma gives more than 2000rs.Amrita calls Kabir. He says I don’t want to cut the cake, well save some for me. She asks him to come back in ten minutes. Kabir returns home. Meera comes home and meets everyone. Angad comes from the office. She says I have gift for Kabir. Baljeet and Pammi come home. Guneet says you have come on a good occasion. Baljeet says I came here for Kabir. He asks Angad to park his car. Angad leaves. Dada ji jokes about Pammi and Baljeet. Baljeet says Pammi, your dad doesn’t want us to come. Guneet says no, daddy was asking you. Dadaji says no. Baljeet says I wont stay here long, I will go after cake cutting. Pammi says we can go now if you say so. Amrita says no, Dada ji is always joking, I will make you some good tea. Baljeet says you know I cannot refuse you, where is the birthday boy. Guneet says he is out, he will come in some time.

Baljeet says Pammi wanted to come so early, Kabir is not there. Nimmo asks Amrita to bring some food for Baljeet. Pammi says to make bread pakodas and pudina chutney. Meera says you had to talk about something. Angad says yes, come. They come to Amrita’s room. He actually says I wanted to talk for a long time. Soni comes and says Kabir didn’t come, mom gets mad, dad calls. He asks what should I do, he will come. Angad takes Meera. Nimmo says go and see where Kabir is, I will beat him. Meera says I will call him, he does not answer, he wants to insult me ​​in front of Pammi and Baljeet. Angad says we will go to terrace. Meera asks what is the problem, tell me. Pammi stops them and says you are not married yet, let her hand. Dada ji asks if they cant go talk, they are getting married, pakodas breaks came, leave. He asks Angad to leave.

Amrita says I will beat Kabir today. Meera says we are going to cut the cake. Kabir comes and says don’t interfere, I will cut the cake. Guneet says talk to her well, she is your would be Bhabhi. Kabir says she is my friend. Amrita asks her to come. Angad gets angry. Baljeet loves cake. Pammi also asks Amrita to bake a cake for Baljeet’s birthday. Kabir says I will have half cake. Meera says don’t make drama, cut the cake soon. Kabir says Amrita will cut cake with me, Karan used to cut it. Amrita and Kabir cut the cake. Everyone sings the song. Kabir gives the cake to everyone. Guneet gets sad and misses Karan. He is crying. Kabir wears Karan’s doctor’s coat and comes. He asks her to get it from Karan’s hand. Amrita reminds Kabir.

Guneet is crying. Dadi says it is a happy occasion today, don’t be sad. Angad asks Guneet to have the cake. He says we three brothers are together. Everyone sings zindagi mere ghar aane… and gives the cake to Guneet. They are all smiling. Amrita imagining Karan. She’s talking to him. She gives him the cake. He also feeds her. She’s crying. He asks her to smile once. She smiles. He smiles and disappears. She sees Pritam coming on his bicycle. She is scared. Pritam meets someone and takes the drugs. He leaves. Meera shows Kabir’s birthday photos. She says this family will soon be mine. Apa says it won’t be easy to separate Meera from this family. Krishnakant watches. Naveen asks her to send cold coffee to her room. Meera argues with Naveen and calls him lazy. Krishnakant asks what she saw in this family. Apa says love. He asks if I don’t love him, I gave him an expensive treatment. Apa says she doesn’t want a car, but relationships, family.

He asks if she has less love in this house, I don’t love her, you don’t love her. Apa says I love him, but you decide for his family. He says I had no money to treat my wife, I always regret it, I want Meera to get the best of her life, I want her to have a better family, a better guy than Angad. Meera asks them to see the photos. He says nice, too good. He leaves. Meera asks what happened to her. Apa says he forgot the difference between relationship and business, I mean he is worried about his business. He goes to his room. He receives a call. Man says Meera profile is uploaded, very soon you will get reply. Kabir is at the cafe with his friends. Kabir’s friend Sandy shows the matrimonial website. They see pictures of rich girls and like it. Kabir sees Meera’s profile. He says your company is a fraud. Sandy says she is our new client, she is KK Sehgal’s daughter, her profile was uploaded yesterday, she is amazing. Kabir scolds him and says she is my would be Bhabhi. Guys say Sandy, this is Meera, she is engaged to Angad. Sandy asks why his profile is on our website, it’s a special case, they want to find the guy soon.

Amrita shows the jewelry for Meera. She talks to the family. Kabir comes there and calls Amrita. She says come here, I am in Dada Ji’s room. He just asks her to come with him. He says Meera’s dad uploaded her profile, Sandy confirmed from his office, his company is running matrimonial website, KK’s uncle doesn’t want Meera to marry Angad. She is shocked to see Meera’s profile. She asks how can KK’s uncle do this, he told about their alliance last year. She remembers Angad and Meera’s engagement. Krishnakant thanks Guneet for accepting Meera. Guneet says you convinced Dada Ji. Krishnakant says Meera wont have better family than all of you. He kisses Guneet. Amrita watches. FB ends. Kabir says we will send mom and follow uncle KK’s class. Amrita says no, we need to know what Meera wants, is she also involved, no, you call Meera, I will talk to her. He calls Meera. Meera comes to Dargah with Apa.

She talks to Angad on call. Angad says I cannot come, I have office job. She gets angry with him. Meera turns off her phone. Amrita asks why will she turn off her phone. Kabir asks if she is with her father. She says no, we will talk to Angad. Angad asks if Meera called you now, she is still fighting. She asks what. He says she disconnected my call, am I doing my job or taking care of her. He leaves. Dada ji and grandma arrive. Dada ji asks why are you tensed. Amrita shows Meera’s profile on the website. Dadi says it means Krishnakant doesn’t want Meera to marry Angad, he had put that ad on website. He asks how, she came here yesterday. Kabir says she is not answering our calls. Amrita says go talk to KK’s uncle. Dada ji says fine come with me Kabir, Nimmo shouldn’t know. They see Guneet and Nimmo at the door. She says there is no need to go anywhere, I will talk to KK. Amrita says you are not going. Nimmo says no, I want to know the truth, I will go with the proof, do you come or should I go alone. Guneet nods.