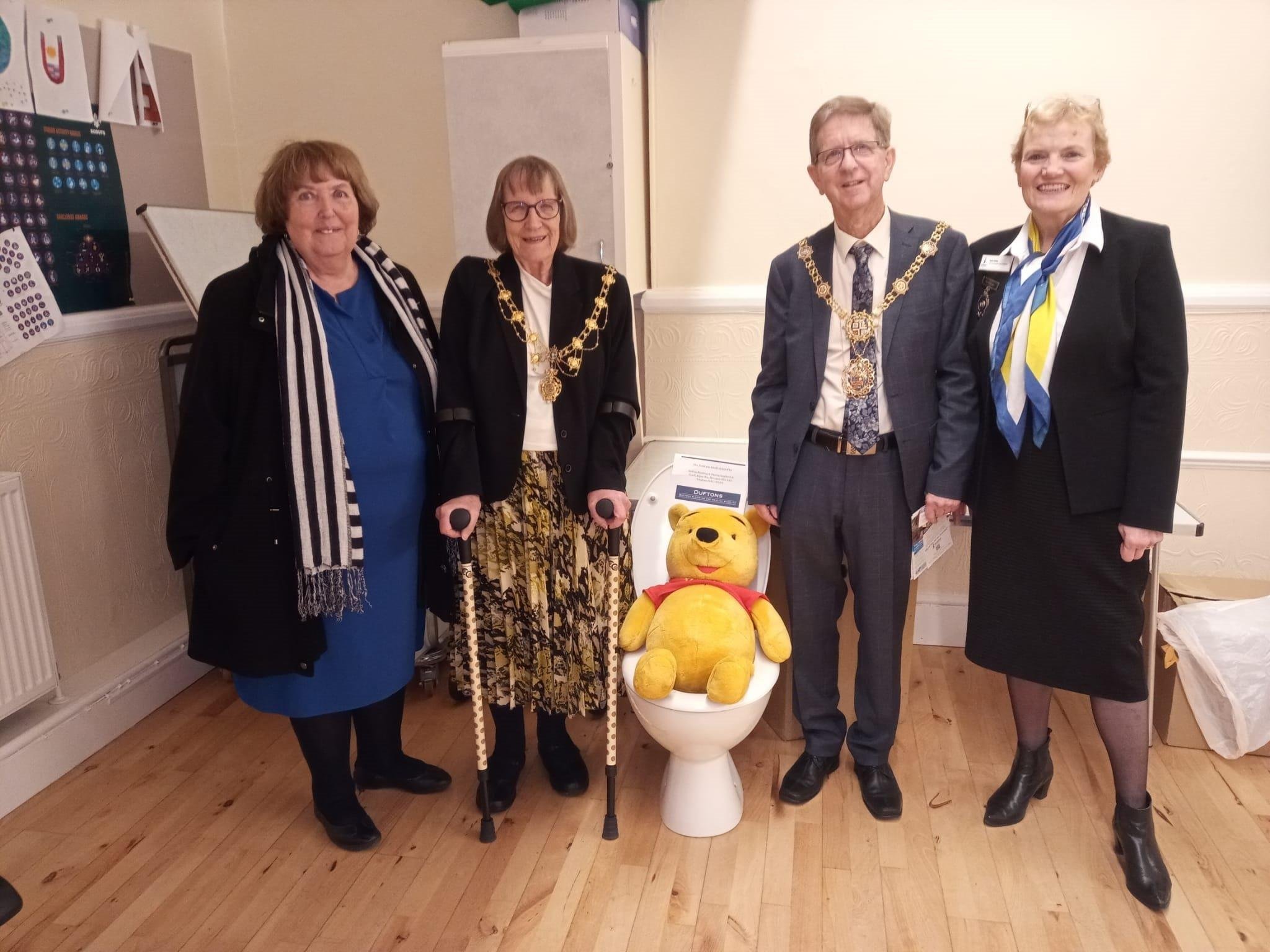 In early March the Mayoress and I attended a presentation by Soroptomist International of Harrogate District at St Paul’s Parish Hall. We learned from the presentation that one in four people in the world lack safe drinking water and toilets, especially in Africa. A donation of £60 is helping to fund a facility in a poorer community that will allow families to build basic toilets, access clean water and learn about hygiene. The Mayor and I were thrilled to help with the Soroptomists Appeal and donate for a sanitation facility in Uganda.

Myself and the Mayor had the pleasure of attending the Harrogate RNLI meeting at Rudding Park on 9th March. The local committee has raised funds for the RNLI since 1952 and we have heard of two successful events which were a golf day last September and an ‘autumn show’ in October.

We made three visits to KR Ali Taekwondo events during the month. The first was aimed at children in the 4-7 age group. The second visit was to the KR Ali Taekwondo Academy 6th Harrogate Mayor’s Cup Poomsae Championships.

This event held at the Rossett Sports Center attracts competitors from across the UK and overseas. We were impressed with the whole event which was beautifully organized by Kambiz Ali, the founder of Harrogate Taekwondo.

On March 20, the Mayor and I had the privilege of attending the opening of the new clubhouse at the Bilton Dragon Bowling Club. The club in my neighborhood is first class and offers bowling on a quality green. I was delighted to cut the ribbon and announce the opening of the pavilion which was followed by excellent tea!

On March 21, we attended a meeting of the Rotary Club of Harrogate of which I am an honorary member. It was good to meet some members and I told them about my role as mayor over the past ten months.

On March 22, a Harrogate International Partnerships meeting was held at the Council Civic Center where I was delighted to receive gifts from the Mayor of Wellington, New Zealand. The gifts were presented by Kate Spencer who gave a summary of her visit to New Zealand and her meeting with the Mayor of Wellington. Also at the meeting, Elizabeth Smith of the Commonwealth War Graves Commission made a presentation which included a reference to the 23 New Zealand RAF personnel buried at Stonefall Cemetery. It is intended to mark ANZAC Day on April 24 at Stonefall.

On March 25, the latest ‘walk to school’ initiative took place at Willow Tree Primary School on Wetherby Road. The event supported by Zero Carbon Harrogate and the Harrogate Town Football Club Community Group began with children marching from the football pitch, led by the club’s mascot, to the school gates. A large number of students participated and myself and the mayor were delighted to be there and talk to the children about using the car less and reducing carbon emissions.

The Mayoress regularly attends meetings of the Harrogate Spa Ladies Group which meets monthly at Wesley Chapel on Oxford Street and recommends membership to those interested.

Charities have struggled to raise funds over the past couple of years so I hope the Nidderdale Walk on Sunday 8th May will be a successful event. The march organized by the Harrogate Rotary Club will support local charities and one in particular is Supporting Older People which is one of my designated charities. Myself and the mayor will be present.