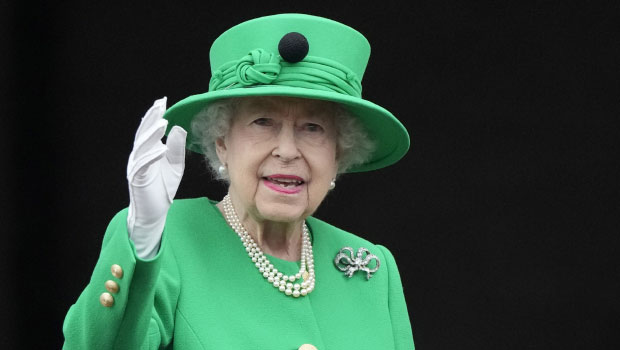 Queen Elizabeth II, 96, happily greeted people from the balcony of Buckingham Palace with his family on Sunday, marking the end of his platinum jubilee this week. The monarch, who skipped some Jubilee events like the June 3 reception and the Today Show, wore a green coat with a matching hat and white gloves in her last surprise appearance, and greeted the spectators while displaying a big smile. She was joined by her son Prince Charles and his wife Camilleas well as his grandson Prince William and his family, including his wife Kate Middletonand the children, Prince George, Princess Charlotteand Prince Louis.

As well as the Queen, who is celebrating 70 years on the throne, the other members of the Royal Family were dressed to impress during their time on the balcony. Charles wore a dark blue suit with a light blue and white patterned tie while Camilla wore a black-trimmed white coat dress. William wore a black suit with a black and white patterned tie while Kate showed off a red dress with flared long sleeves.

The children also wore stylish outfits. George wore a suit similar to his father’s with a navy and white striped tie while Charlotte wore a white coat dress. Little Louis topped it off with a black coat and blue shorts.

Queen Elizabeth in color: photos of the stylish monarch

The Queen’s latest appearance with her family comes after she failed to attend Jubilee Day Two activities on June 3. for her, at a reception held after a religious service at St. Paul’s Cathedral. “[Kate] said yes, [the Queen] it was good, it was just very tiring yesterday, and [the Queen] had a really, really good time,” a woman at reception via The Echo of the North.

The Queen is also said to have been dealing with health issues, which has caused her to miss other events over the past few months. In addition to testing positive for COVID-19 in February, she appeared to have mobility issues.

Prince Edward: 5 things to know about Queen Elizabeth II’s cousin who joined her on the balcony

Despite her health issues and the handful of Jubilee absences, the Queen still left lasting impressions for the appearances she made, including one in the form of an entertaining video with Paddington Bear. The royal and the beloved bear sat opposite each other at a table and shared tea, in a comedy skit that received rave reviews. It was featured at the start of the Platinum Jubilee concert, which featured talented artists like Alicia’s Keys, Adam Lambertand Diana Ross.