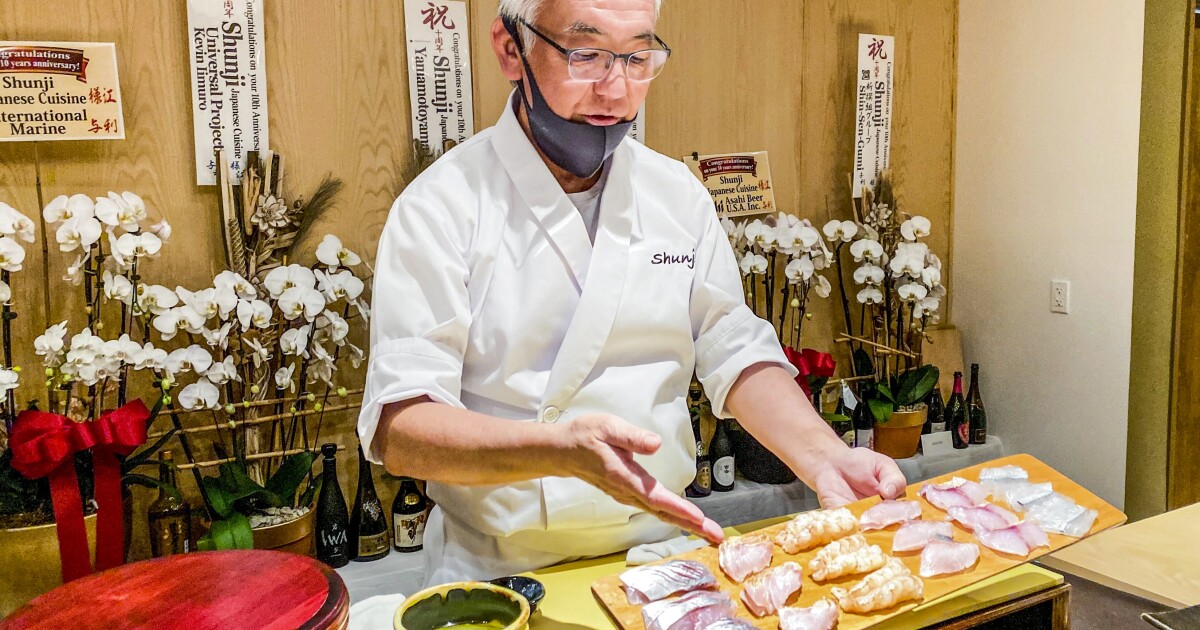 For eight years, from 2012 to 2020, Shunji occupied the wildest and most unique place in Los Angeles for a possible sushi bar: the Sawtelle restaurant operated in a 1930s stucco building shaped like a soup bowl. .

Mr. Cecil’s California Ribs was the previous tenant before Shunji Nakao took over the space, although over the decades it has also housed a Mexican restaurant, a bar with the Roundhouse name on the nose, a toys and a real estate agency. It was originally built as one of the locations of a pop-up restaurant chain called Chili Bowl; the programmatic architecture largely outlasted the franchise.

Do you like this newsletter? Consider subscribing to the Los Angeles Times

Your support helps us deliver the news that matters most. Become a subscriber.

The food Nakao prepared there had its own sense of place. He is one of the quiet architects behind LA’s sushi culture. Along with his brother, Tetsuya, the native of Yokohama (a city 20 miles south of Tokyo) helped open Matsuhisa in the late 1980s. The brothers opened their own company, Asanebo in Studio City, in the early 1980s. 1990. Nakao left Asanebo in 2000, working in other restaurants in the metropolitan area and running his own restaurant in Tokyo before returning to Los Angeles to bring his unlikely circular theater to life.

Shunji’s menu was ambitious in every way: there were a la carte options as well as omakase at several price points, with elaborate vegetable fancies woven among the seafood dishes. the tomato ageashi, a block of red fire that would be finished with, say, a slice of grilled zucchini and a solitary shishito balanced on top. Sometimes the vegetable bites could be a little tricky, but the sushi and sashimi served by Nakao were always some of the most seasonal and skillfully prepared in town.

Then 2020 crashed: Nakao, like so many of his peers, turned to making elaborate chirashi and take-out bentos to sustain his business. A complicated situation with the owners, involving a bid to preserve the building amid demolition plans, forced Shunji to move.

The new address on Ocean Park Boulevard in Santa Monica — serene, minimal decor, darkened windows — is a deep reset. The bowl building included an eight-seat counter and seven tables. Shunji 2.0 has two rooms, each with white ash counters and room for seven seats: Nakao serves customers at one counter and chef Miki Takahiro at the other. There’s only one dining option: omakase at $250 per person, pushing Shunji high into the cost stratosphere but not quite reaching the heights of Sushi Ginza Onodera in West Hollywood and Morihiro in Atwater Village. , where prices top out at $400 per person. (Reservations are competitive at all of these restaurants; each has a dedicated following.)

In a recent email exchange, Hayato’s chef-owner Brandon Go (a Southern California native whose father runs a sushi restaurant in Seal Beach) and I exchanged ideas about school of omakase which has become the dominant style in Los Angeles. It is half a dozen or more ornate little dishes – some cooked and some uncooked, displaying mastery of an array of culinary techniques – that precede the central sushi parade. Go calls it “sushi-kaiseki”. Some popular Tokyo restaurants follow this format. At places like the famous Sukiyabashi Jiro, however, the focus is strictly on sushi, and a meal can be finished in 30 minutes. “Before, sushi was like eating pizza,” Go wrote. “Nobody ever mentioned anything else on the menu.” He identifies Masa Takayama and his menu at Ginza Sushi-Ko (New York’s Masa’s LA predecessor) as potentially reinforcing this style of omakase in Southern California.

I think of all this during my recent meal at Santa Monica Shunji, where a more solemn environment means even more thoughtful food. I had made a reservation to sit in front of Nakao. Her bite-size geometric plant creations were gone, and I didn’t miss them. Not that the flora disappeared: they were part of striking compositions like tiny glazed fish fried on mashed spring cabbage, made almost as smooth as applesauce while still being tastefully recognizable. Texture studies were more in-depth, such as with translucent, slippery baby eels in dashi topped with slightly sticky grated mountain yam. A pinch of shiso flowers gave off faint echoes of mint and crunch. Surprising.

Other appetizer staples: smoked king mackerel lobes in green tea leaves; lotus root and shrimp “mochi” (in quotes because the dumpling resembles mochi in shape and chewiness despite not being made with sticky rice) in a clear dashi sauce topped with a single bean green and arugula flowers; and ichigone, a soothing and lively soup of steamed abalone and uni with turnip and wakame.

The sashimi procession began with the sayori, the slender silver fish whose season (from late winter to early spring) is coming to an end. Nakao makes nigiri with rice that’s a bit cooler in temperature than other sushi masters in town (namely Mori Onodera), and it still has a pleasant light bite. His presence was friendly and relaxed but also intensely focused. He stood in front of rows of orchids sent in by owners of other Japanese restaurants, with notes congratulating him on his move. At one point, I asked him what it was like to be in the new space.

“The last place just got too big,” he said. “I’m happy to serve fewer customers again.”

He had all six of us in the room hunched over for the next track by then. We were busy taking pictures of each room at first, but now we were present. Nodoguro (black-throated peach) has drawn reactions for its sweet richness. A meatball made with firefly squid, a favorite ingredient I remember from the old location, delivered liver-intensity. An ankimo hand roll felt like a finale. We all looked a little sad when a block of crispy tamago appeared to signal the end.

But there was an encore: clam miso, then pear with sake jelly and lime ice cream.

At the time, the group was talking about other favorite sushi restaurants around LA, and how happy we were to be seated in front of Nakao again. Then we walked into the night, and the idea of ​​eating food as remarkable as this in a chili bowl shaped building was like something out of a trippy movie, not exactly impossible but a reality different that already seemed long gone.

Dinner at the Huntington Beach Pier

The Los Angeles Times Food Bowl, presented by City National Bank, is teaming up with Outstanding in the Field to serve a meal featuring sustainably caught seafood. The event will take place at 4 p.m. on May 12 on the Huntington Beach Pier. Participating chefs include Brian Bornemann of Crudo e Nudo, Andrew Gruel of Slapfish, Chris Tompkins of Broad Street Oyster Co. and Valerie Gordon of Valerie Confections. The event benefits the Los Angeles Food Bank. Tickets are $365 and can be purchased here.

The Los Angeles Times “Coast to Coast” tasting event, presented by City National Bank, will bring together chefs from both coasts for a night in New York to serve up some of their favorite dishes. The event, hosted by the Los Angeles Times Food Team, will take place May 18 from 7-10 p.m. at the Altman Building, 135 W. 18th St., New York City.

Tickets are $150 and can be purchased here.