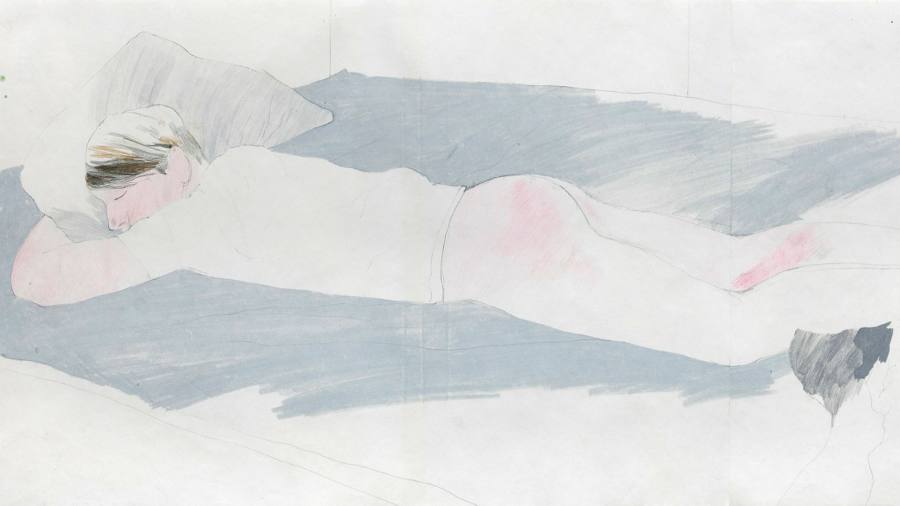 The genius of David Hockney is distilled in the fascinating show ‘Love Life: 1963-77’ at Bath’s Holburne Museum

It is only one gallery, but some of the most glorious designs of the 20th century fill it – designs made by pen that brushes paper as vibrantly and seductively as stones bouncing on water.

Even the still lifes are travellers’ tales: the inscription in Arabic “these matches belong to David Hockney”; the pens posed, as a stand-in for the artist, to survey the view from the window of The Wyoming building in New York. They give a restless summer vibe. And wherever Hockney goes, the nimble young men are there, slumped in armchairs and deckchairs (“Nick, Hotel de la Paix, Geneva”, dapper with long hair and a bow tie; “Gregory, Château Marmont”, languishing in Hollywood), or sinking into the pillows. ‘Dale and Mo’ embrace on Hockney’s bed in Notting Hill. Stretched in the middle of the Atlantic (on the QE2) is “Peter Feeling Rough” – but not so rough that his long back, legs and shapely buttocks are not provocatively highlighted.

These drawings are intimate enough to invite you into the sleepy calm of the encounter, broken, you imagine, by the stroke of the pencil whipping the page. Hockney insists on silence for the ink drawings: “You can’t draw a line too slowly, you have to go at a certain speed, so the concentration required is quite strong. . . You have to do it all at once. . . it is more difficult than anything else; so when they succeed, they are much better designs.

Brevity is wonderful: a reduction to the essential plus a few revealing details. Metropolitan Museum curator Henry Geldzahler leans back, absorbed in a book, against swollen cushions as plump as he is – but the cigar held prominently between his fingers affirms power, negates sweetness. “For Sleepy Kas” depicts the merchant Kasmin taking a nap on the grass; always alert, he kept his round tortoiseshell glasses on, and behind him the tree trunks, barely a few lines, are imposing versions of his horizontal, thrusting form.

The ink drawings sparkle with energy and a fragile truth. Those in colored pencil evoke character and the moment as much, but the effects are softer. Slumped in a green fabric sofa and looking uncomfortable, 1970’s “Ossie Clark in a Fairisle Sweater” is already as troubled as it is hip. The same year, his wife Celia Birtwell, blond curls, black-rimmed eyes, cigarette in hand, is cool as a cucumber in a ruffled and romantic multicolored dress. His Mies van der Rohe chair mimics his body – curvy, slender.

At the time, Hockney struggled to “paint the relationship of these two people” in his famous double portrait “Mr and Mrs Clark and Percy”. In the drawings, Ossie’s wary gaze and reclining posture, Celia’s control but longing anticipate the painting. 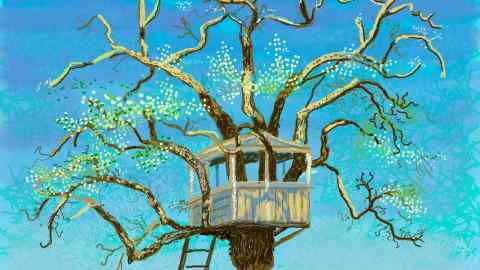 Although each work here stands in isolation, together they reveal experimental processes and shifts in Hockney’s thinking. In his twenties and thirties, he was both authoritarian and innovative, as captivated by discovering places and people as he was by formulating new ways of making images.

Dealer Offer Waterman, who held an excellent drawing exhibition in London in 2015, believes that especially after 1966, when Hockney met 18-year-old Peter Schlesinger, “he began to see naturalism as a way to use his work to get closer to him, so these are some of the most intimate drawings of his career”.

That year’s “Peter”, half naked, wearing bright striped socks, is typical of Hockney’s mix of eroticism and wit. In 1972, Peter is still the handsome boy with full lips, now dressed – striped suspenders, elegant shirt – and looking sadly from afar: the drawing marked their relationship which is unraveling. “Gregory in Golf Cap” follows – a crystal-clear portrayal of Hockney’s new boyfriend, Gregory Evans, complete with Cupid’s smile, cascading curls, all the grace of a dragonfly.

The progress of the drawings in Love life — the phrase is by Hockney, he daubed it on the walls of his Center Pompidou retrospective in 2017 and now adds it to his signature — demonstrates the autobiographical impulse of his work. Signaling his rejection of the dominant abstraction upon leaving the Beaux-Arts, he entitled his first personal exhibition, in 1963, Photos with people in them.

It might serve as a subtitle here, but in the early 1970s he felt, he says, “trapped in naturalism.” Draftsman prodigy – rivaling Picasso as a natural master of the line – Hockney had, sooner or later, to negotiate with this easy virtuosity in order to no longer expire.

His drawings, while capturing visible reality, also point a way beyond mere representation. It so superbly achieves three-dimensional volume and weight per line that it hardly needs shading or spatial retreat: the glass, the teacup, the bottle, the book in the sparse conjuration of an after- sensual Provençal lunch “Vichy Water and Howard’s EndCarennac” for example.

In 1973, Hockney moved to Paris and became interested in allying himself with the French tradition. Degas’ backlight effects and Matisse’s abstract simplification and luminosity, as well as the French pictorial trope of seeing the world through a window, all play a role in “Louvre Window, Contrejour, Paris”, where light filtered through a golden blind in an architectural setting as rigid as the mowed lawn of the Tuileries garden outside.

The underlying theme here, how nature is framed by the formal concerns of art, is echoed in the wonderful final piece ‘Tulips and Painting’ (1977). His conceit is a picture within a picture, the foreground vase no more or less ‘real’ than the background, which consists of a fragment of Hockney’s iconic, perspective-defying ‘Self-Portrait with Blue Guitar’ painting. , created the same year.

In the small image of inky tulips beginning to blossom into sculptural patterns, much of what defines Hockney’s genius is distilled: acute observation, graphic brilliance, crystalline stylization, sense of passing time, play with space pictorial. Love life looks back, forward, celebrates the present and – especially when followed by lunch in the beautiful garden of Holburne – is as invigorating as its title suggests.

Death Isn’t As Bad As You Think, End Of Life Doctor Says