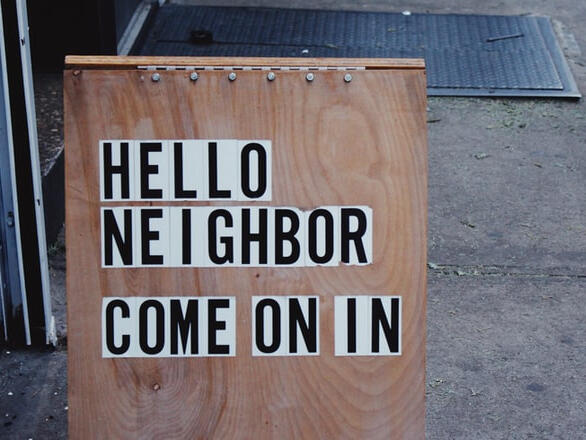 **This article is based on non-fiction by actual events that I witnessed first hand; used with permission.

There are just some things that should be kept private, however, my neighbor didn’t realize or didn’t know that windows allowed people to see into his house. The neighbor was active in the community and everyone knew he had a lot of money.

His wife was a very busy businesswoman and that week she was out of town attending a conference. I knew she was gone because she told me before she left that she would be gone all week but wanted to meet when she got back for a nice afternoon tea.

She and I often got together for afternoon tea and just to visit. She was a very nice woman and I enjoyed our visits. We talked about flower gardens and sipped afternoon tea together and spent about an hour at least once a week.

Since she left, I was busy working in my office that particular afternoon when I heard a car door close. I peeked out the window and saw a young woman enter through a side entrance into my friend’s house. My friend’s husband tenderly kissed the young woman and gave her a huge kiss. He then swept this woman off her feet and carried her to the stairwell and down the stairs.

I reflected on what I had seen. Should I tell my friend? I wasn’t sure what to do. While I was thinking about this, the young woman left and my friend’s husband walked past the windows half-dressed.

About an hour later another young woman arrived and the same thing happened. He kissed this young woman again and swept her off her feet and carried her up the stairwell. I knew now that he was not interviewing these young women for a play.

He was often involved in community games, so having people show up was not necessarily confirmation that he was cheating. However, the hugs and kisses and him carrying the women up the stairs were confirmation that something was going on that shouldn’t be.

It lasted several days. Now I used to hear a different car door every hour or so. Each time the same thing happened. At that time, I was wondering what I should do or say to my friend.

My friend came home from her conference and I was wondering what to do. She called me gushing about how her husband kept the house spotless and how nice he was. We scheduled our afternoon tea a few days later. I was thinking about what to say to her when a few days later she called to cancel our tea party.

My friend had tears in her eyes when she called me to cancel our tea party. She told me that she and her husband were getting divorced. I haven’t said anything yet about what I saw, but she told me that another neighbor informed her that her husband was cheating on her. Then she went to church and the pastor told her too.

My friend was left alone in the house for three months. I helped her pack and told her how sorry I was for the way things had turned out for her. She never asked me if I knew what was going on or if I had seen anything and I never said anything because by now she already knew and I had been spared the agony to be the one who had to tell him.

Would you have called your friend if she was out of town to tell her what was going on while she was away? Would you have waited for his return? Should I have told him what I had seen too or was I right to give up? Share in the comments what you would have done.