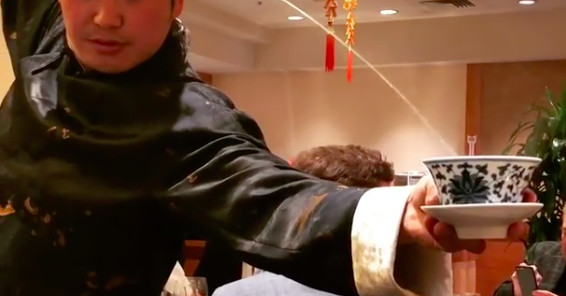 Liu, a 35-year-old master practitioner, spins his kettle and pours hot tea with the precision, seriousness and panache of “Salt Bae” – chef and restaurateur Nusret Gökçe whose graceful sprinkling of salt has attracted him viral attention on the internet. But as one commentator points out on a video of Liu (taken by none other than Chez Panisse founder Alice Waters), the tea master might make Salt Bae look a little lazy. Plus, he’s playing with even hotter stuff.

Of course, Liu, like Gökçe, who just opened his first New York restaurant, is much more than a pretty face and an impressive gesture. On the one hand, Liu has several poses, all of which he learned while studying with a Szechuan tea master. And on the other hand, the gongfu cha is not the only trick Liu has up his sleeve. He is also a master in the art of lian bian, or “face exchange”, a dance that consists of changing the traditional mask at lightning speed.

Z&Y and Chili House owner LIjun Han have taken Liu to San Francisco, where he will continue to perform for the next two weeks. Mondays and Fridays during lunch and dinner he will be at the Z&Y restaurant, and on Wednesdays, Thursdays and Saturdays he will be at Chili House. Liu will also be performing kung fu tea at 7 p.m. on Sundays at Z&Y before changing his hat – or face, so to speak – to perform his face swap routine afterwards.