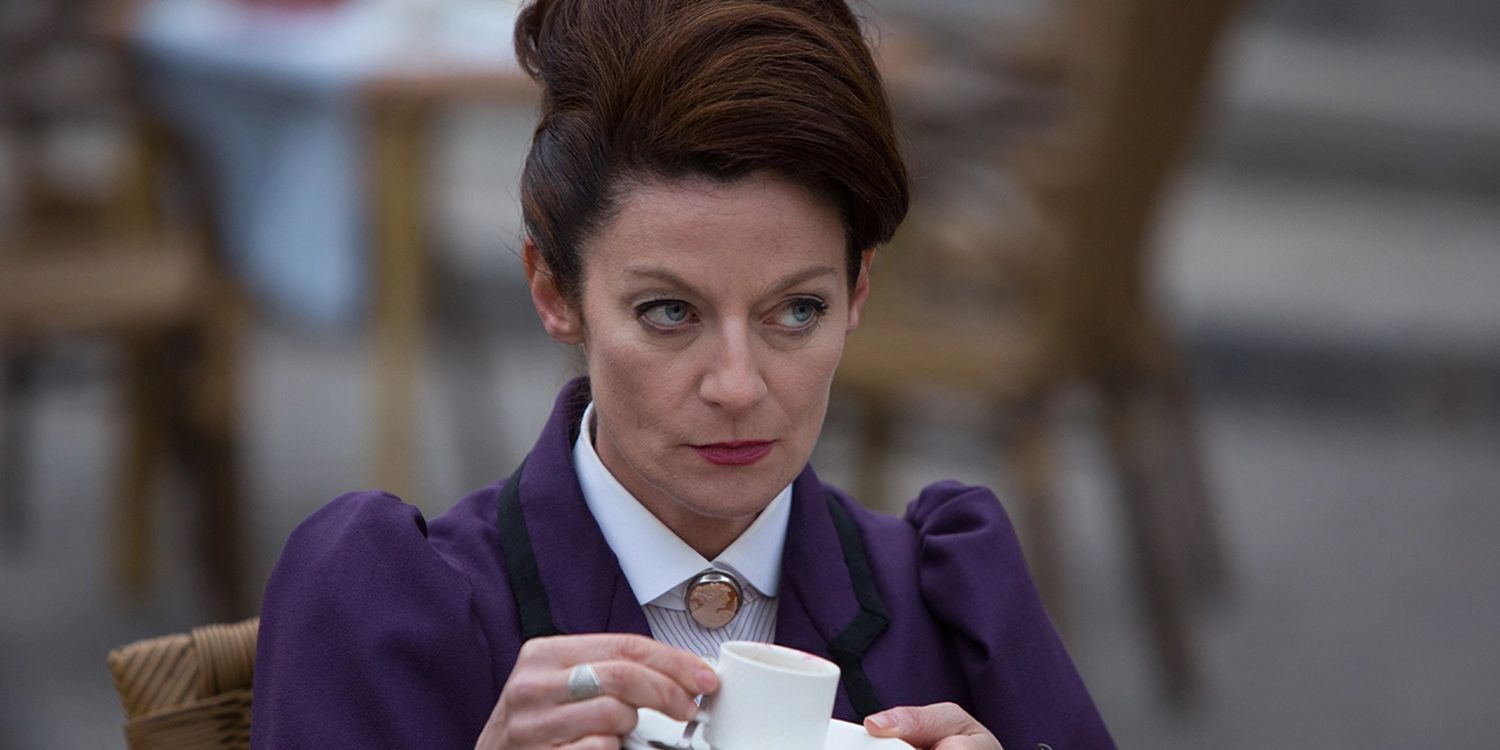 For nearly six decades, Doctor Who introduced no shortage of fantasy villains. From the cold-blooded Daleks and their leader Davros to the recent depiction of the horrific Swarm, the Doctor’s enemies span all of time and space. Many are entire populations of hostile species, but every now and then an individual arrives who challenges the Doctor with a unique ability for evil plans. Of these individuals, the oldest recurring figure is the Master, a time lord whose brilliance rivals that of the Doctor.

GAMER VIDEO OF THE DAY

Like the Doctor himself, the Master has taken many forms over the years, played by different actors through several regenerations. They first appeared played by Roger Delgado in 1971, alongside the Third Doctor (Jon Pertwee). Since then, the Master has been defeated several times, only to reappear in a regenerated form. The most memorable of the Master’s reincarnations, however, went by a different name: Missy, short for “Mistress”, which she decided was more appropriate after regenerating into a woman. Played by Michelle Gomez, Missy was a recurring character on the show between 2014 and 2017. During this time, she finally redefined and reaffirmed the Master’s role in the story and his relationship with the Doctor.

RELATED: Doctor Who: The Story Behind The Iconic Theme Song

Since their introduction, the Master’s main purpose has been to serve as a foil to the Doctor. The two have a surprising amount in common: both are renegades, time lords who weren’t content with the rules and regulations of Gallifreyan society and so fled to carve their own paths through space and time. Both are some of the brightest minds their planet has produced, and both are willing to go to great lengths for what they perceive to be the highest good, even though their definitions of “highest good” are very different. Yet despite their similarities, their personalities are often meant to be opposite – and in the modern series, no Master plays that foil role as well as Missy does with Twelve.

Of the modern Doctors (and perhaps the entire series), Capaldi’s Twelfth Doctor is among the most dramatic and intense; his “carefree and playful” version plays electric guitar on a tank. He has his lighthearted moments and amusing banter, but his sense of humor is ironic and sometimes morbid, especially compared to Eleven or Nine. That’s where Missy comes in – whimsical, temperamental, almost flippant when it comes to her evil plans or life or death situations. Her levity and humor not only emphasize how dangerous and unpredictable she is, but they also serve to bring out the Doctor’s strongest qualities: compassion, loyalty, and a belief in trying to be a good man.

A rivalry as old as time

Since the Master’s first appearance in 1971, he and the Doctor have always been rivals. Sometimes they’re bitter enemies, sometimes they’ve come close to reconciling – but they still hold each other in some regard. Each has a certain respect for the other’s intelligence, which is why their rivalry has gone on for so long. The Doctor knows that the Master should never be underestimated; meanwhile, the Master continues to toy with the Doctor, as the latter is the only one smart enough to entertain the Master. Missy plays that dynamic all the way.

In series 8, Missy remains a phantom presence until the two-part finale, but from her first appearance, audiences know she’ll be the big bad. And they’re not disappointed – the reveal of his true identity is one of the biggest moments of the season. It worked because it both shocked the audience and made sense. No one expected the Master to return as a woman, but then again, who else could come up with a plan to take over Earth with zombie Cybermen? Her plan was created with the specific intent of getting the Doctor’s attention, and she uses it to do what the Master has always done: try to convince the Doctor that they’re not that different. Their rivalry is rooted in an old, old friendship – and while other Masters have hinted at their former closeness to the Doctor, no one else wants it as much as Missy. For even after her Cyberman scheme is thwarted, Missy is far from over.

Missy becomes a wayward ally in Series 9’s “The Magician’s Apprentice,” when the Doctor finds himself in mortal danger among the Daleks. The Master and the Doctor have sometimes worked on the same side before; the Master has tried to help the Doctor out of sticky situations a few times in the classic series and in extended media. However, he usually has an ulterior motive. In the two-part series 9 opener, Missy’s only ulterior motive is to prove herself to be the Doctor’s closest friend; that she, before anyone else, reserves the right to know him better. As Clara points out, Missy is indeed constantly trying to kill the Doctor; however, her line and actions in the episode suggest that she doesn’t really want him dead – or that their relationship has earned her the sole right to kill him. Of course, Missy is no less ruthless; she is still trying to trick the Doctor into killing Clara near the end of the second episode, “The Witch’s Familiar”.

When she reappears in series 10 inside the Doctor’s vault, Missy is still a villain and a force for evil. Around this time, however, the Doctor attempts to rehabilitate her after interrupting her execution, as seen in a flashback in the episode “Extremis”. Here, the Doctor is seen to spare her life not just because she claims she can learn to be good, but because they are, deep down, true friends. She plays the role of a reluctant ally throughout Series 10 as the Doctor tries to rehabilitate her – and at times, comes close to success. This allows the audience to see what their friendship might have been like, had it not been for the Master’s ruthless and manipulative nature.

By now it’s well established as to what made Missy such a great version of the Master – but aside from being a brilliant character, she served a larger purpose in the mythos of Doctor Who himself.

The gender swap during regeneration was hinted at in the classic series, but it was never seen on screen until Missy’s appearance. If Michelle Gomez hadn’t done such a stellar job with the role, we probably wouldn’t have seen Jodie Whittaker as Thirteen, or perhaps any other stunning examples of Time Lords. Missy showed fans that a character they knew and loved could take on a new iteration with a different gender – and while she definitely had her own personality (like any Time Lord regeneration), she was still the master in his heart.

Additionally, this gender swap also allowed Missy to build on the relationship between the Doctor and the Master. Missy’s flirtations, her teasing referring to the Doctor as her “boyfriend”, implied an even deeper level of connection. Although she makes it clear to Clara that her feelings are not romantic, they go beyond superficial friendship; it is a kind of relationship that only millennial beings could understand. This depth continued during the Thirteenth Doctor’s time in the series, in which Whittaker’s doctor and Sacha Dhawan’s master delve into their troubled past together, in a way more emotional than fans had yet seen in the modern series.

Missy took everything the Master had ever been – foil, rival, friend, foe – and portrayed them all at once. She is one of the most complex renditions of the Master fans have seen, distinguishing between evil and good, chaotic as always but never without a plan. Her character was rooted in the foundation created by those before her, but she built it in a new and beautiful way that will be an inspiration to future Masters. After all, we probably haven’t seen the end of the Doctor’s oldest enemy.

Demaris is a reader, writer, and gamer from Juneau, Alaska. While studying linguistics at McGill University, she wrote for student publications spanning music, theater, film, and various pop cultures. She now puts her love of games to good use as a writer and editor for Game Rant. Always a fan of fantasy, Demaris has a particular love for games of this genre and spends his free time writing epic and grimdark fantasy.