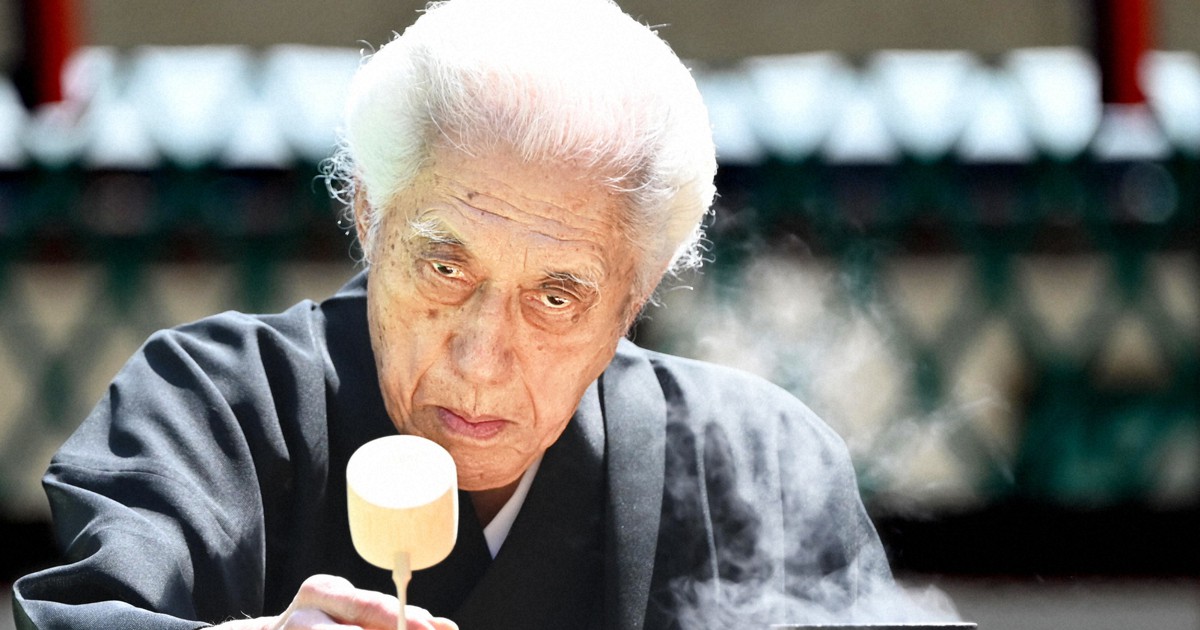 “‘We are counting on you.’ I can hear my fallen comrades calling me from above, ”said Sen Genshitsu, former grandmaster of the Urasenke tea school in Kyoto. A prominent figure in the Japanese tea ceremony tradition, he was also a member of a Pacific War Suicide Mission Team. The voices he hears belong to other soldiers mobilized to die aboard fighters and other human-operated weapons that have crashed into enemy ships.

Dr. Sen’s steadfast determination to honor his comrades and do his duty as a war survivor has led him to dedicate his life to helping create a world without conflict through the philosophy of the tea ceremony.

On April 19, Sen turned 98 and held a tea offering ceremony at Nishinomiya Shrine, the main shrine of the god of fortune located in Hyogo Prefecture, western Japan. He has a long-standing custom of performing ceremonies on his birthday.

Standing 175 centimeters, Sen led the ceremony in a black kimono and white “tabi” split-toe socks. Using a “fukusa” cloth, he purified the tea container filled with tea, then using a teaspoon to put powdered tea in the tea bowl. Hot water from a steaming kettle was poured into the bowl. After whipping the tea with a tea whisk, the master transported them to the main shrine building. Offerings of two bowls – a “koicha” or “thick tea” and a “usucha” or “thin tea” – were made under the gaze of about forty people.

After the ceremony, we spoke in the backroom of the sanctuary, where he said, “I have prayed that the coronavirus pandemic will be contained as quickly as possible. Many around the world are suffering. Each year Sen makes the tea offerings in the hope that lives will no longer be lost due to earthquakes, torrential rains, disease and other tragic calamities that come to mind.

When I asked the Grand Master what he thought was still healthy at almost 100 years old, he gave an unexpected response: “I am ashamed. He showed no sign of content with his longevity and said shame had engulfed him for the 76 years he had outlived his comrades, even though he was “supposed to die too”.

At the same time, he also thanks that “showing humility towards each other, as if to say to the other party,” go ahead “or” you first “, without any discrimination or differentiation, nurtures harmony and create a peaceful world. ”He went on to say,“ The practices of the tea ceremony teach us that. I survived. That is why I do tours around the world hoping for a world. conflict-free, starting with the one bowl of tea before me. ”

Sen was born in 1923 as the eldest son of the 14th generation leader, or “iemoto”, of Urasenke, founded by Sen no Rikyu (1522-1591), which had a profound impact on the “chanoyu tea ceremony” “. He started taking classes on June 6, at the age of 6, a start date believed to bring great improvement in artistic pursuits. His fate was to succeed the tea school as a 15th generation master.

But the war cast a shadow over society when the conflict between Japan and the United States began in December 1941, the same year Sen entered Doshisha University. In October 1943, arts students were called up for military service. Although many have expressed concerns about the departure to war of the successor of the Urasenke school, the military made no consideration for the family line. Sen passed the physical exam for conscription and joined the Imperial Japanese Navy. On the day he left, he told his younger brother to take over from Urasenke if the worst should happen. His mother insisted, “If anything happens, call the mighty Rikyu. It is your guardian deity.

Sen served in the Tsuchiura Naval Aviation Corps in Ibaraki Prefecture before being appointed second lieutenant for the Tokushima Naval Aviation Corps in western Japan. In 10 months, he acquires skills ranging from piloting to correspondence which generally require several years to master. During an inert bomb-dropping session, he and a flight partner were forced to fight on the orders of a superior unhappy with their inability to carry out instructions. Some died in training accidents, others attempted suicide. He was confronted with the reality of death.

He remembers being summoned to the Totsutotsusai tearoom by his father a few days before his departure in December 1943. As they faced each other, his father showed him the dagger Rikyu was using to perform the seppuku, or disemboweling ritual.

Rikyu served 16th-century warlord Toyotomi Hideyoshi, and his master ordered him to ritually kill himself. Various theories exist as to why the Warchief commanded, including Rikyu’s disapproval of Hideyoshi’s desire to invade Korea, as well as anger at a statue of Rikyu installed on the Sanmon Gate of Daitokuji Temple. Rikyu refused to listen to those around him saying he should apologize to Hideyoshi, choosing instead to kill himself.

The dagger was created by Awataguchi Yoshimitsu, a prominent sword maker of the Kamakura period (1185-1333). Its blunt blade about 10 inches long sparkled in the tea room. Sen’s father only said that Rikyu had used him to kill himself. At the time, he wasn’t sure why he had shown him the dagger, but after entering the military he finally understood his intention.

On the surface, her father seemed to be saying, “When it’s time to die, you have to with dignity like Rikyu.” Are you prepared for it? But maybe his father’s real message to his son was, “You absolutely mustn’t waste your life so easily. Never let it go to waste.”

(This is one of a three-part series. The next part will be released on September 27.)

This genius from Waterloo, Ont., just got his master’s degree in physics at 17