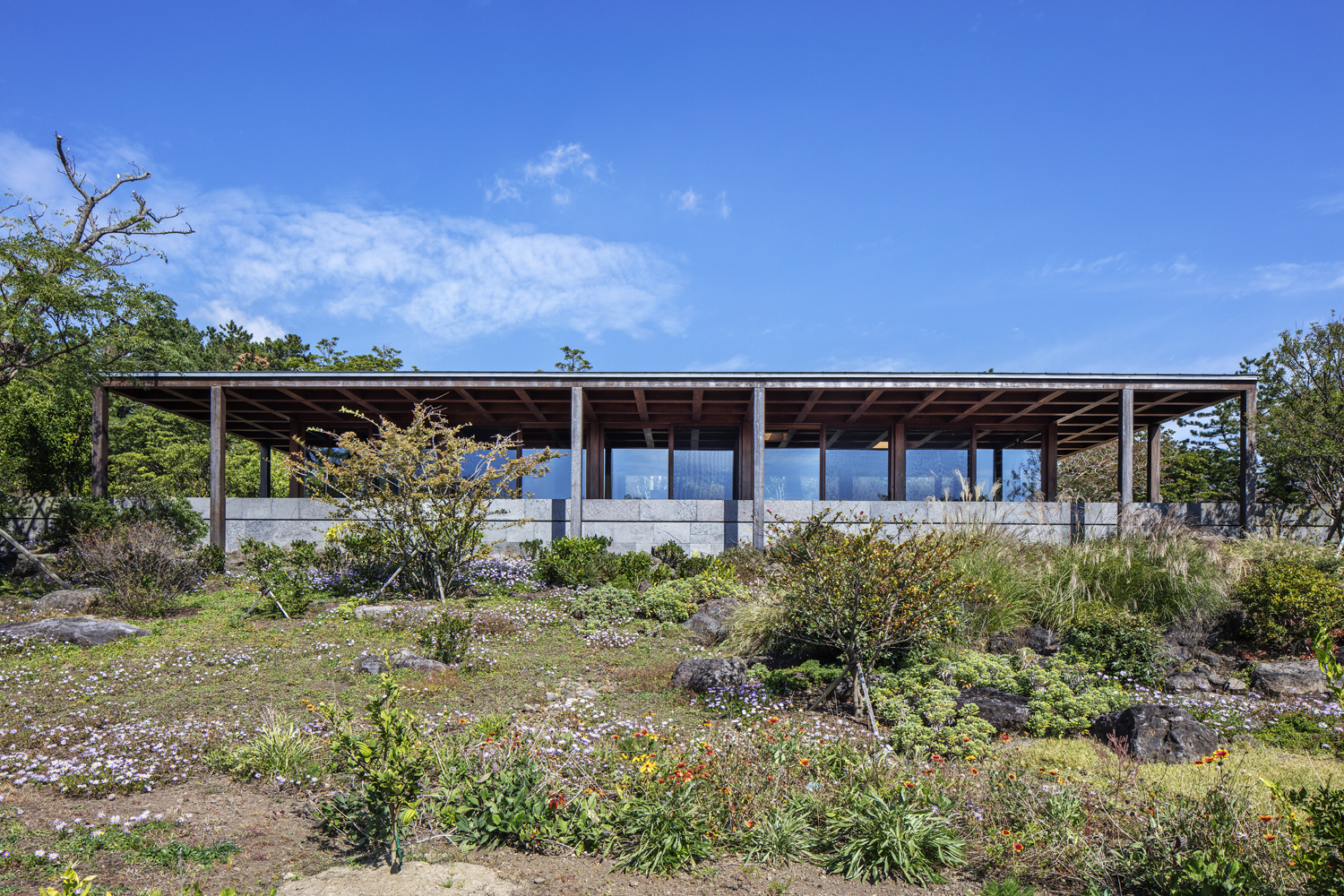 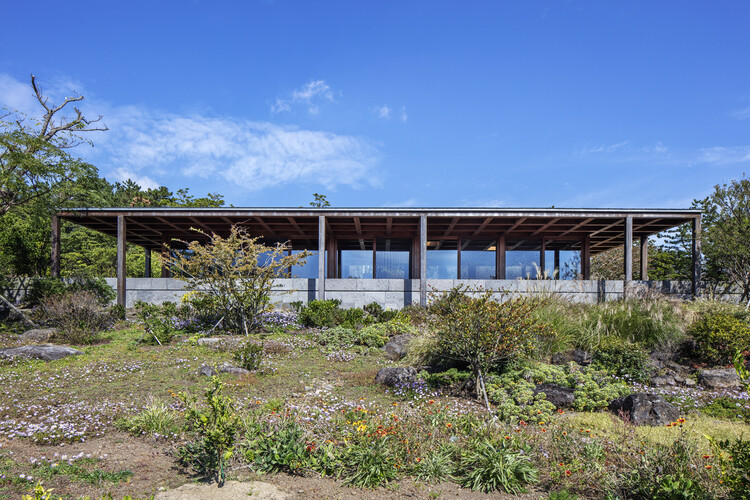 Text description provided by the architects. First, we built the house – Jeju’s house. Subsequently, we were asked to design a tea house. What is a tea house? Was our first question. It’s such a privilege to be an architect, to be confronted with new projects, new challenges. To solve something, study and learn.

As a buffer to the House, the clients had purchased the adjacent site to the West, in order to enlarge the gardens and also to build a place where guests could be received without disturbing the intimacy of the Family and the House. Extending something that is already built and that everyone is happy with is a task that requires thought.

The house already had an “annex” – the caretaker’s house – which fits perfectly into all the volumes, materials and functionality. This new “annex” could not share the humble character of an annex. Nor could it be something
lower, at the bottom of the garden, less well built and, typically, devoid of aesthetic concerns. Customer requirements, like ours, are always high.

Would we use the same materials? The same volumetric games? This seemed problematic, given the discrepancy between the brief and the Client’s intentions. Curious as always about traditional architecture, in this case Korean traditional architecture, we gathered information and visited the best examples, especially the local ones on Jeju Island. These are masterful works. Especially the wooden ones.

It appeared to us that the materials should be: stone, wood and copper. We prepared a first proposal, in order to check the brief and better understand the needs and expectations. The location had to be at the highest point of the site, from where one could marvel at the sea and the horizon. The rest would be a landscaped garden. Since the building is located in the center of the new site, we had to give it connections quickly and easily noticeable.

The brief is quite simple. A generous living space, where one could, with ceremony, prepare, serve and taste a precious tea, but also, and with the same ceremony, open a bottle and taste an excellent wine. Thus, we realized that the Tea House classification is a bit broader than its title. A room to rest, but also a place where a visitor could spend the night with all the comforts. A bathroom, for typical Korean usage, can be full or partial.

The partitions are sliding screens which, copying and interpreting the beautiful traditional examples, allow the room to be either totally or partially closed, or to open completely onto the landscape. And it’s the same in the bathroom. Create a game of nearly endless possibilities, allowing spaces to morph and change as different activities unfold. Outside there is a generous south-facing covered veranda and a large east-facing terrace.

It was decided that the teahouse would meet the stone floor; the almost black volcanic stone of Jeju, and that its entire structure, partitions and fixed furniture would be made of wood. Sheets of copper formed the covering of the roof. But how was it built? In Korea, the know-how of wood construction has been lost. So we came up with a scheme to have the construction work carried out in a workshop in Portugal and then ship all the prefabricated components to be assembled on site. Our proposal was immediately accepted and we had a new challenge.

The wood we chose was Afizélia, or Dossié – afzélia pachyloba. The experience of Casa de Chá da Boa Nova – Álvaro Siza 1958-1963 – validated its qualities, even in a place so close to the sea and with difficult climatic conditions. We had become accustomed to the fact that designing and building in Korea is easy, and moreover satisfying, because in Korea the desire to do things well is deeply rooted. From now on, it had become possible to have the frame made near my office and my home.

Sawing, tests, preparation, assembly, then dismantling and, in two containers, shipment to Korea. After that, we had to send over four Portuguese carpenters for the reassembly. Although language may seem like an obstacle, in fact the construction, concreting and service installation work went smoothly; the project documents were all correctly interpreted and followed. When the wood arrived, it was a question of erecting it in the synchronized diagram of the prefabrication plan, where the language is consensual and understood by all.

Everything is there but nothing is visible. As usual in our projects and buildings. All the services necessary for absolute comfort were included, but they do not take over. They exist but are invisible because non-essential, unsightly.

The connections to the House, on foot, also had to be something natural, as if they had always existed. There is a service on the upper level and another path which, from the entrance to the House, allows you to walk in the garden, or to access the Tea House. A “door” connects the House and the Tea House. The garden, designed by Seo-Ahn STL Total Landscape, the same landscape architect who designed the garden of the house, is one of those surprises that almost only happens in Korea because it is the result of an experiment accumulated over several centuries. It happened in a “blink of an eye” and it’s as if he had always been there.

Designing and building this way is every architect’s dream. At least for those who dream. The reality is generally very different. Now I know what a tea house is and what you could drink there.