More than 4 pounds a day is the amount of waste the average American produces. In total, that’s more than 1,600 pounds a year for every man, woman, and child in the United States.

If you want to see waste diverted from the landfill and transformed into remarkably beautiful and inventive art, head to Studios on the Park in Paso Robles for his new show, Life Refurbished, which runs until June 27. A second opening reception is scheduled for Saturday June 4th.

“We had about 100 submissions,” explained curator Jordan Hockett, “and almost every artist who submitted received something. A few pieces were so huge we couldn’t fit in, but even those artists already had a piece in the exhibition. We just had to reduce it for everything to be in order.”

All the works have one thing in common: the artists had to use salvaged materials in their work, whether it be wood, metal, glass, ceramic or fabric.

“We wanted artists to do anything in any medium as long as there were repurposed, upcycled, or repurposed elements incorporated into their art in some way,” Hockett added.

The results are fantastic. Larry Le Brane created bobble tower, a shoe fetishist’s dream. The platform shoes feature fused glass drawer pulls, luggage straps, found objects, metal and wood, and two stiletto heels. At the front of the platforms are figurines of Mexican musicians playing with a mirror ball backdrop behind them, which sits inside a mouth full of teeth. You have to see it to believe it.

Another really whimsical piece is by Hellie Blythe Norse Berserkers, a Viking ship made from an animal mandible filled with Vikings whose faces are empty, wide-eyed pistachio shells. The ship sails on a watercolor background.

In total there are 32 artists and around 60 pieces. Only one piece was disqualified for breaking the rules, “but this artist had another more relevant piece that came in,” Hockett noted. 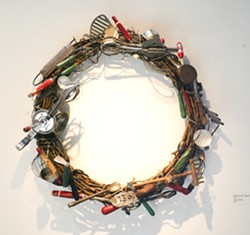 In part, the show hopes to remind viewers of our trashy ways. Americans generate three times more waste than the global average. Much of what we throw away could be reused.

“I’m a painter myself, so I’m aware of the high cost of materials,” Hockett said.

Instead of artists spending money on new materials for each piece, Studios on the Park wanted artists to be “ingenious” and consider the “environmental” consequences of their work.

“We were hoping they would look at what they’re doing, but in a new way,” Hockett continued.

Another charming piece is that of Philip W. Henry Motor Man I, a sculpture in wood and copper. It has a steampunk flair – a little robot that looks like a toggle switch to come to life.

Likewise, Janet Smith Full circle: yesterday and today captures a bygone era in the kitchen, with hand-cranked mixers, potato mashers and tea strainers all fashioned into a decorative wreath.

Does Hockett have a favorite piece?

“It’s so hard to tell because of the wide variety of mediums. It’s hard to judge between textiles and woodcarving and assemblage and mosaic – the exhibition is so diverse. In general, c That’s what we were trying to do with the exhibition, to present a very beautiful diversity.” 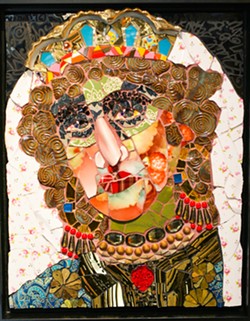 There’s plenty to see at Studios on the Park, including trash turned into treasure. What’s in your trash? Δ