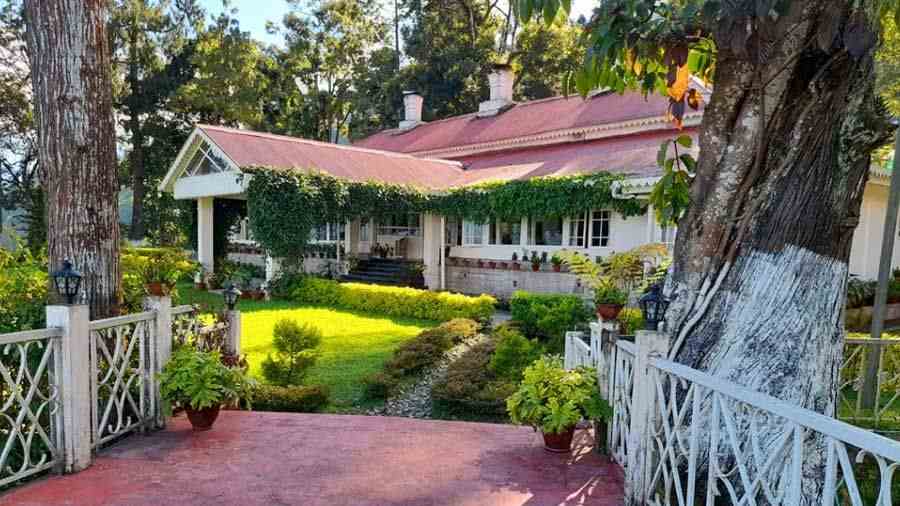 Turn left from Darjeeling station and you are removed from the hustle and bustle of the main street in minutes, at least for a while. After clusters of dilapidated houses, old general stores, and rustic shops selling momos, you come to the crowded Chowk Bazaar. After a little while of cruising this chaotic stretch, crossing the sprawling frontage of the famous North Point School, you will be treated to views of the emerald slopes of the valley. Soon, as the car swerves onto a dirt road and the woody scent of tea bushes permeates the air, you come to a stately bungalow bordered by lush lawn in an open resort.

This is Ging Tea House, a planter’s bungalow in the middle of the historic Ging Tea Estate. In the local Lepcha language, to get old stands for ‘extended slope’ and the plantation, established by the Darjeeling Tea Company in 1864, does its name justice. British planters managed the gardens until 1965, after which Darjeeling Plantation India Ltd took over. In 2004, BD Tea Estates Private Ltd, a member of the Chamong group, became the owner. The family business decided to include a full tea plantation experience for guests traveling to stay at Ging Tea House.

The estate’s bungalow, dating from the mid-19th century, has been preserved in a time warp. The six suites have been meticulously restored and are packed with antique canopy beds, hardwood floors, mirrored dressers, and delicate corner rooms. A grand piano and pool table, both from the same period as the house, adorn a spacious living room that opens onto a carefully manicured lawn lined with seasonal flowers and some old pine trees. An independent gazebo overlooks the rolling green tea bushes that seem to roll down the hill.


A quintessential Ging experience includes a visit to the estate’s tea factory. Here, the freshly picked leaves are wilted and rolled, fermented to a coppery red and dried to a dusty black before being sorted and packaged. Witnessing the process is a sensory experience, which culminates in the tea tasting room.

A tea picker at work

Almost similar to a wine tasting session, you drink a healthy sip of tea from a bowl, swirl it around your mouth to make sure the concoction and plenty of oxygen pass through all of your taste buds to create a profile. equal taste. At the end, you spit out your sip of the brew sample into a container – an important step in fulfilling your role as a professional tea taster.

Angling on the Rangeet River

A hike, or a breathtaking 4×4 ride, from the mill through lush green bushes and forest, takes you to the sandy banks of the Rangeet River. This is the perfect spot for a sumptuous picnic, usually prepared by the ever-smiling property staff, Prashant and Anjum. Ging’s support team members, all from the local community, are an integral part of the experience and make you feel right at home. They exude warmth and friendliness and will keep you well fed with English breakfasts on the gazebo or on the patio, four-course Chinese lunches, and sumptuous dinners featuring local favorites (definitely try the spinach pork) .

The gazebo where you can have breakfast, a snack or a cup of tea in peace

During your stay, the gazebo could become your favorite place. Soaking up the beauty of the emerald slopes, bathed in gentle sunshine one moment and covered in a vaporous mist the next, is the best way to savor a cup of the best second flush at Ging’s.

Or: Ging Tea Estate is a three hour drive from NJP Station and Bagdogra Airport and 10 km from downtown Darjeeling.

To stay: Choose from six well-appointed suites, some with old fireplaces. The two best suites are Blue Lady and Royal Assam.

Sugato mukherjee is a Kolkata-based photographer and writer whose work has appeared in The Globe and Mail, Al Jazeera, and Nat Geo Traveler, among others. He is the author of a book on Ladakh and a book on the sulfur miners of East Java.

Chorney-Booth: The Tea House is recovering after long pandemic shutdown