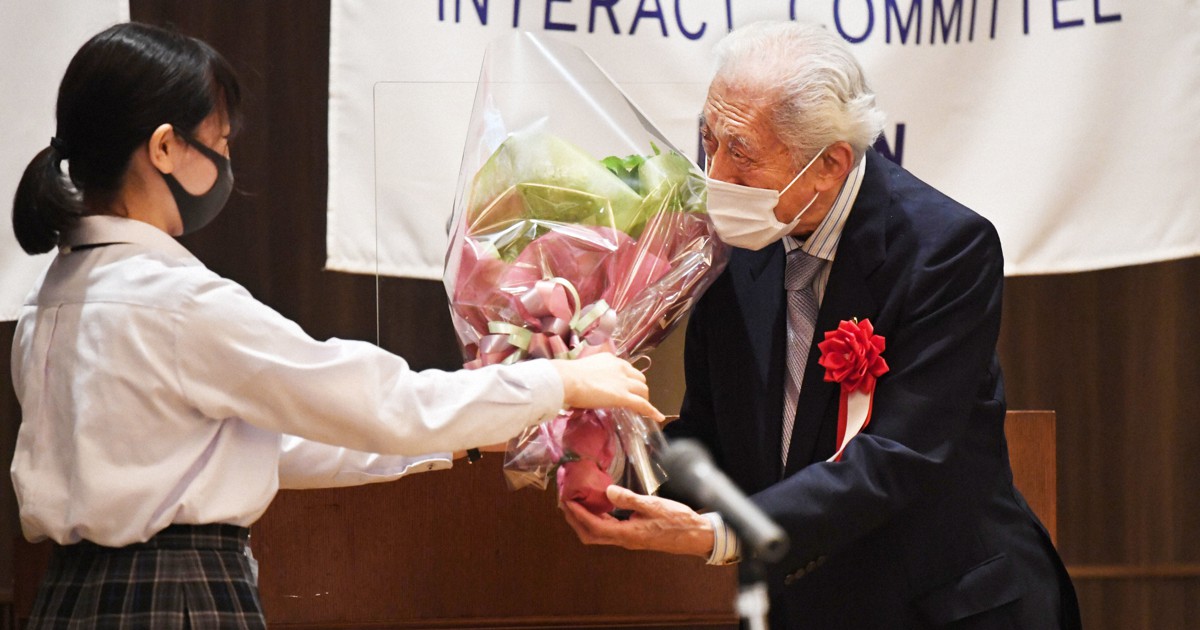 The wish of peace from a Japanese tea master (part 3): spreading the spirit of humility of the ritual

Sen Genshitsu, 98, a former grandmaster of the Urasenke tea school, lived until the end of the Pacific War in 1945 despite being posted to a suicide bombing unit. Overwhelmed by the guilt and shame of having outlived his comrades by not being able to join the suicide mission, a demobilized Dr Sen returned to his hometown of Kyoto. He couldn’t help but hate the United States and its people.

One day he saw a US military officer from the Allied Powers Headquarters (GHQ) take a tea ceremony lesson from his father in an Urasenke tearoom. Although one came from a victorious country and the other from a defeated country, there seemed to be no difference in their position when performing the ritual. The two sat in the traditional “seiza” position and sipped tea, apologizing for eating and drinking before the other. Although this must have been part of American occupation policies, Sen felt the officer was trying to absorb Japanese culture. Her father explained the spirit of the “wakeiseijyaku” ritual in English as the four principles of “harmony”, “respect”, “purity” and “keeping the spirit.” ”

Wakeiseijyaku is the basic philosophy of the tea ceremony and the legacy of Sen no Rikyu (1522-1591), which had a profound impact on the tradition. “Harmony” is the spirit of offering each other tea, “respect” the principle of treating each other with respect regardless of social status, “purity” the spirit of commitment in a ritual with a purified mind and “keeping one’s mind” meaning reaching a state of peace in which the mind is unshakable.

As Sen watched the particular scene in the tea room, he realized that the spirit of the tea ceremony could foster understanding among people around the world and bring them together to create a world without conflict. It was at this point that Sen had the idea to devote his life to efforts contributing to peace.

Another important turning point was the tea master’s experience of training at the Sen family’s ancestral temple in Daitokuji. One day, the priest superintendent suddenly approached him and told him that his eyes looked lifeless, as if he was still at war. They added, “Come back after you get rid of this state of mind.” As Sen was weeding the garden, the priest caught him off guard with a question, “What are you thinking about pulling these weeds?” He had no answer and the priest remarked: “The weeds that have been pulled up are also living beings. Are they not being removed to let other weeds live? Sen understood that the priest superintendent wished to use this example to imply that the lives that survived should live for the lives lost.

Spending his days feeling nothing but shame would not let the souls of his comrades in the suicide unit rest in peace. Even now, many years later, Sen’s determination to implement his goal of achieving world peace through the tea ceremony is unwavering.

After the death of his father, a 41-year-old Sen took over the tea school in 1964 to become the grandmaster of the 15th generation. Although the Urasenke custom is for the Grandmaster to bear the name of Soshitsu until death, Sen canceled his post at the end of 2002 and offered it to his eldest son, while declaring himself “Genshitsu”.

Sen has obtained honorary doctorates and degrees in tea cultivation from Japanese and foreign universities. He has held more than 100 titles, including that of UNESCO Goodwill Ambassador and President of the United Nations Association of Japan. Before the coronavirus pandemic, he was traveling abroad for a total of 100 days a year. The tea master has held tea offering ceremonies around the world, while praying for a conflict free. However, it was only around the age of 60 that he began to talk about his own war experiences.

“From the period of rapid economic growth, the Japanese began to lead a life of luxury, and that the country was at war is now a distant reality. Under such circumstances, I couldn’t help but put my experiences into speech. We need to make it clear how disgusting this is and to ask why Japan has engaged in a futile war. Why has the country forced suicide units to throw their lives away? We must never treat the war conversation as a taboo. ”

On August 3, Sen gave a lecture to high school students in Kyoto’s Shimogyo district. About 40 people, including online participants, listened intently to the tea master’s memories of suicide missions during the Pacific War. “For me, the war will not end until I die. It is you, the young people, who hold the key and the power to create a world where the humans of the planet join hands and appreciate each other”, their he said.

Misaki Kuribayashi, 16, a sophomore student at Heian High School affiliated with Ryukoku University, commented, “It was very difficult to listen to her experiences in the suicide bombing unit. But to create a future where we don’t repeat those mistakes. , I thought that we who heard Dr Sen’s speech should pass it on to as many people as possible. ”

2022 marks 500 years since Rikyu’s birth. When asked what he thought of this special occasion, Sen said, “Once you enter the tea room, there is no difference in social status. Neither were the samurai no longer allowed to wear the katana. The most important thing Rikyu taught during the tea ceremony was a state of mind. compassionate and caring towards others. The war was the extreme example where this was lost. people do not have the heart to be considerate of each other, Earth’s environment, a big problem today, will also be ruined. I feel like such a moment is not far away and I am very worried. ”

The tea master added, “I am not afraid of death right now. I am ready to die anytime. I would like the world to be a quiet place where we don’t have to use the term. “peace.” ‘This is the last message I want to get across. ”

(This is the last part of a three-part series.)

Sen Genshitsu was the 15th generation leader, or “iemoto,” of the Urasenke tea school in Kyoto until the end of 2002. He obtained honorary doctorates and degrees in tea cultivation from Japanese universities and foreigners. He has held more than 100 titles, including that of UNESCO Goodwill Ambassador and President of the United Nations Association of Japan. He served in the Air Force Division of the Imperial Japanese Navy during the Pacific War and later joined a suicide mission team. From this experience, he dedicated himself to achieving peace through the philosophy of the tea ceremony.

Take a sip around the world with the magical tea house in Filer, ID

A Japanese tea master’s wish for peace (part 2): dedicate his life to his…

A Japanese Tea Master’s Wish for Peace (Part 1): Dealing with the Dark Past of…